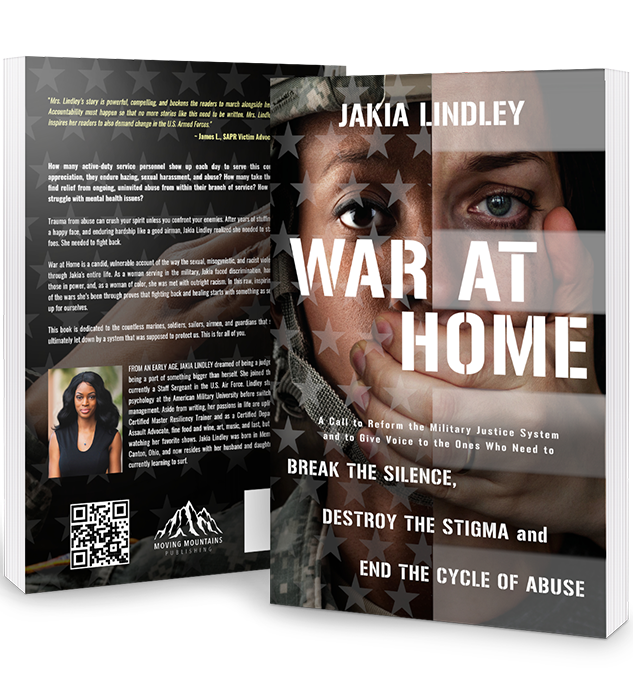 How many active-duty service personnel show up each day to serve this country, but, instead of appreciation, they endure hazing, sexual harassment, and abuse? How many take their own lives, unable to find relief from ongoing, uninvited abuse from within their branch of service? How many service members struggle with mental health issues?

Trauma from abuse can crush your spirit unless you confront your enemies. After years of stuffing her emotions, putting on a happy face, and enduring hardship like a good airman, Jakia Lindley realized she needed to stand toe-to-toe against her foes. She needed to fight back.

War at Home is a candid, vulnerable account of the way the sexual, misogynistic, and racist violence of the military seeped through Jakia’s entire life. As a woman serving in the military, Jakia faced discrimination, harassment, and abuse from those in power, and, as a woman of color, she was met with outright racism. In this raw, inspiring memoir, Jakia’s retelling of the wars she’s been through proves that fighting back and healing starts with something as seemingly small as standing up for ourselves.

As an advocate, Jakia adds her voice to the hundreds and thousands of silent voices that have served or are still serving in the U.S. Armed Forces. It is time to hold space and listen to our brothers – and sister-in-arms that may be afraid of speaking up due to the fear of retaliation and who may still be struggling to find their way out of the storm.

This book is dedicated to the countless marines, soldiers, sailors, airmen, and guardians that suffer in silence, and were ultimately let down by a system that was supposed to protect us.
This is for all of you.