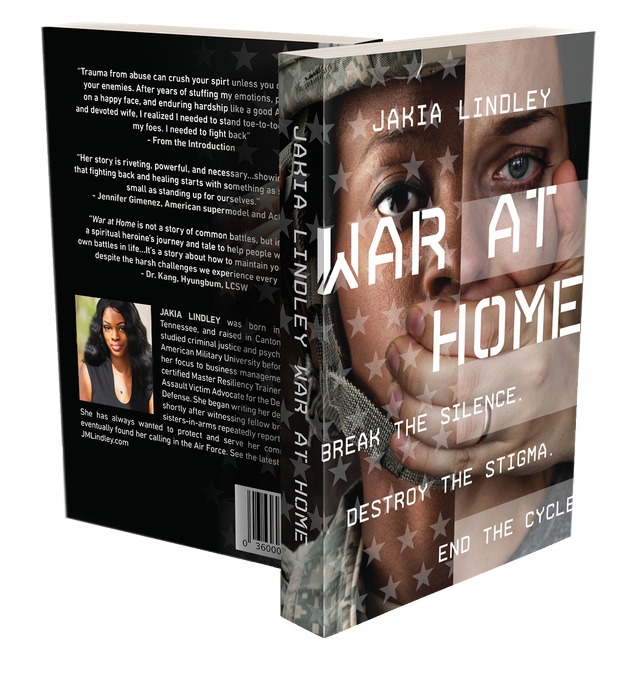 War at Home: Break the Silence. Destroy the Stigma. End the Cycle,
is a call to reform our current military justice system.

Through this book, I’m sharing experiences not yet shared with anyone else—until now. I hope that by detailing the traumatic events I encountered during my journey from childhood through adulthood, I can add my voice to the hundreds and thousands of silent voices that have served or are still serving in the U.S. Armed Forces. It is time to hold space and listen to our brothers- and sister-in-arms that may be afraid of speaking up due to the fear of retaliation and who may still be struggling to find their way out of the storm.

My story, like so many others, is one of repeated sexual and domestic abuse, toxic relationships, and unwanted harassment in the work center. And, again, like so many of my brothers and sisters, I’ve been held down by those in the position of power, and ultimately let down by a system that was supposed to protect me.

This is not only your war, this is my war, too. It’s the war of too many women and children—and even men—across the globe.

Many people in our society place a stigma on victims who report abuse, either shaming them, minimizing the abuse, or denying the traumas even occurred. None of that means abuse doesn’t happen; it just makes it less likely for victims to talk about it and get help. I didn’t want to admit my abuse, either.  Which is one of the many reasons why we need to call for  reform.

This book will be the beginning of a very long journey; I hope you’ll join me in raising awareness and doing the work necessary to initiate change.

We deserve more. It’s time that we demand better.

When I read Jakia’s story, my heart was gripped. I saw her beauty—both in her strength as a woman and courage to become the leader of her own destiny. I felt her pain—in her abuse, her objectification, and the chipping away at her reality by those who didn’t truly see her. And I wanted to come alongside her and add to her power—as we need a voice like Jakia’s to remind us that we are not alone, and we can thrive.
Jakia endured sexual abuse and assault in her childhood. A stranger identified her as something special. As she grew older, both men and women objectified her, heaping unwanted sexual attention upon her—when all she wanted was to do her job. She faced discrimination, harassment, and abuse from those in power. She suffered abuse from some of the people closest to her. And somehow, she survived, facing her battles head on and giving voice to those who could not speak for themselves.
I also couldn’t help but relate some parts of her story to my own. Before I became an actress and model, I was discovered by a photographer at just thirteen years old while walking on the Santa Monica Pier with my mother and brother. I was flattered, and I felt important—and beautiful.
But the truth is that photographer didn’t discover me; he discovered my appearance.
“She’s got the right look,” he told my mom as he convinced her to let me take part in a photoshoot for a famous designer.
No, that photographer never got to know me, the person beneath my skin. From that first photoshoot, few took an interest in discovering the real me. Instead, they sought me out to serve as a living, breathing, walking clothing hanger for designers across the globe. At just thirteen, I became an object, nothing more.
No matter where I went—walking the runways of Milan, gracing the cover of Elle magazine at age fourteen (the youngest ever to do so), shooting music videos for Tupac Shakur and Mick Jagger, or starring in movies like Blow and Vanilla Sky—no one really knew me. Like Jakia, I wore a mask and played a role. Both of us had people try to get close to us as a way to take advantage of us. And both of us, for a time, lost our voices, our power, our mental health, and nearly our lives.
So yes, I relate to Jakia and what she endured at the hands of others. But unfortunately, we are not alone. Countless unnamed victims suffer from similar stories of objectification, sexual abuse, assault, domestic violence, harassment, discrimination, and depression from their experiences.
One in five women in the US will be raped in their lifetime. Since COVID-19, domestic violence has skyrocketed, resulting in nearly 700,000 reported cases and more than 35,000 deaths in the US alone. Victims of domestic abuse have an increased risk for depression, suicidal behaviors, and addiction. More than 80 percent of women and 40 percent of men have experienced sexual harassment. Of those harassed at work, more than 70 percent don’t report it, fearing retribution.
As a woman serving in the military, Jakia faced additional risks and challenges in a male dominated culture. Her inward and outward beauty attracted stalkers and predators alike. As a woman of color, she met with discrimination and outright racism.
Her story is riveting, powerful, and necessary. She takes us on her journey from childhood through adulthood, experiencing childhood assault, domestic abuse, sexual assault, and utter despair. While her spirit wavered at times, her light never went out. Today, she stands proudly with strength, showing others that fighting back and healing starts with something as seemingly small as standing up for ourselves.
While Jakia’s story is unique, readers will see a bit of themselves on each page. Because hers is the story of every innocent child, every daughter, every sister, every member of the military, everyone who has dreamed, every person of color, and every human threatened by crushing circumstances. And my prayer is that you will use the example of her strength to secure safety if you are not safe today. And if you are safe, I pray you will stand up against abuse of any kind until the world is safe for every member.
Jakia makes herself vulnerable in the raw, honest retelling of the wars she’s been through, the wars no one wants to talk about: domestic violence, sexual abuse, discrimination, and abuse of power. Throughout, she displays a maturity and courage beyond her years. She bravely tells how she finally broke the silence, destroyed the stigma, and ended the cycle of abuse—while rediscovering herself.